The stress and strain tensors

When a force is applied to the end of a 1-D elastic object, i.e. a spring, anchored at the other end, the points in the spring move (are displaced), and at each point in the spring there is tension (stress) and distortion (strain).

For example, if a spring of length L is stretched to a length of L + e, then the displacement function appears as follows: 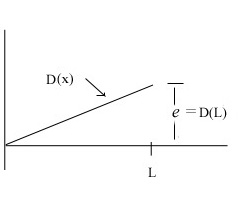 The global stress on the spring equals the force applied to the spring, and this force is replicated at each point in the spring as the tension at that point.

Things are very simple with springs.

The partial derivatives of a vector function arranged in a 2x2 matrix make up the Jacobian, which for the displacement function D(x,y) = (u(x,y), v(x,y)) is given by

The Jacobian J(x,y) of D maps a unit vector r = (rx,ry) to the directional derivative of D in the r direction.

It's not really the matrix that represents the property, it is the map from unit vectors to directional derivatives, and this map is defined by the matrix for the given coordinate system. If we change coordinates, the components of the matrix will change, but the map from unit vectors to directional derivatives will not change. You are likely familiar the converting vector components when there is a changes of coordinates, and the conversion of matrix components is similar and given in Appendix III. When matrices, interpreted as vector maps, are used to represent physical quantities they are called tensors. Thus we have tentively defined the strain tensor at a point in a stressed object as the Jacobian of the displacment function D(x,y) = (u(x,y), v(x,y)).

However, there is a little problem with this definition that requires a change. Notice the following - if a force is applied to an object through a traction, and the object moves vertically or horizontally but 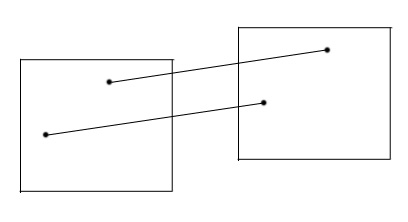 is otherwise unchanged, the displacement vector is the same for every point in the object, hence the Jacobian is 0 at every point, corresponding to 0 strain at every point and all is well.

However, suppose the box rotates and is otherwise unchanged. The displacement vector is not constant for a rotation, hence its derivatives are not 0 and the Jacobian is 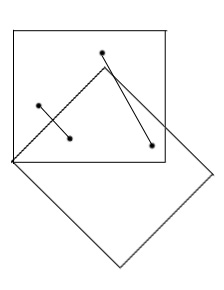 non-zero for every point in the object. However there is no strain on the rotated object. So, the Jacobian, which is non-zero, is not an ideal candidate for the strain tensor, which must be 0 if the object is not stressed.

∂u/ ∂x is the normal strain in the x direction.

∂v / ∂y is the normal strain in the y direction.

The shear strain θ is defined as the change in angle between the x and y axes in the stressed object. In the diagram the shear strain is, using the small angle approximation, θ = θx + θy = ∂u/∂y + ∂v/∂x

Note that when the object is rotated θy = -θy and so ∂u/∂y + ∂v/∂x = 0, and the shear strain is correctly computed as 0.

Thus the strain tensor is

When force is applied to a 3-D (2-D) object it can't be applied at a point, it is applied over an area (line) and is called a traction and has units F/m2 (F/m).

The internal stress at a point in a stressed object is inferred from the strain on the object at that point. In 2-D the strain at a point is direction dependent, and hence the stress causing the strain must be direction dependent, and is represented by a tensor. In 2-D the stress tensor maps a unit vector to a vector having units F/m representing the stress in that direction. The relationship between stress and strain is given by Hooke's Law. Hooke's Law is fully expressed in 3-D, the 2-D form used in the book is